What Will The Upcoming Election Mean For Taxation And Superannuation?

With a federal election looming, some predicting as soon as May, it’s timely to consider some of the legislative changes being considered by the major parties that may impact on taxation of individuals and small businesses.

Liberal and Labor seem to be poles apart on these issues, so along with border security, some of these policies are likely to have a major impact on the outcome of the election.

Let’s take a look at some of the key proposals.

– Repeal (i.e. reverse) laws that allow additional ‘catch-up’ contributions to super for those with a balance of less than $500k

– No changes to any of the above

The Liberal Party have indicated a continued freeze on the Superannuation Guarantee Charge rate (i.e. the rate at which employers pay super for their employees) at 9.5%, while Labor have indicated they’ll introduce gradual increases up to 12%.

Liberal: no change to the current rules around franking credits

Labor: apply a minimum tax rate of 30% to all distributions from discretionary trusts to those over 18

Liberal: no change to taxation on trust distributions 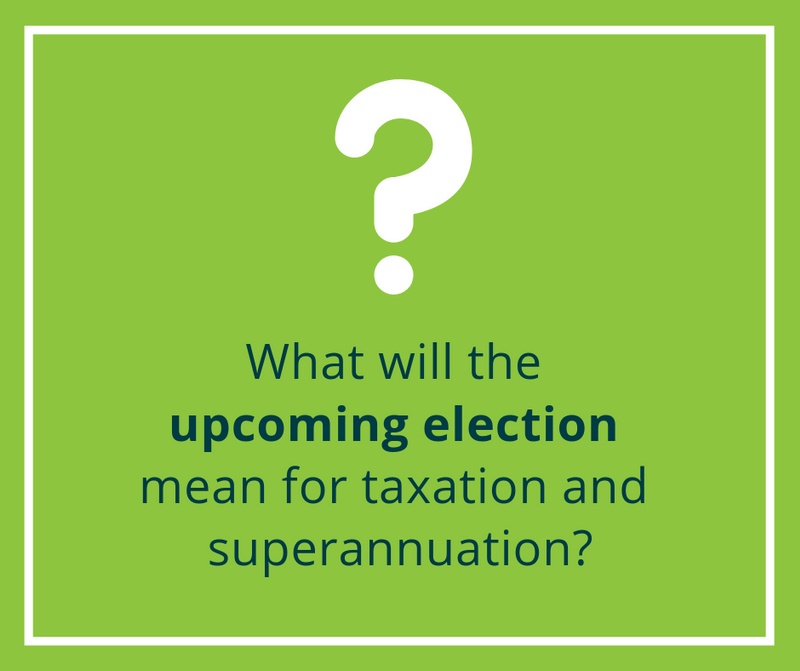 Labor: reduce the CGT discount from 50% to 25%, with exceptions for existing investments and superannuation funds

Liberal: no change to the CGT cap

Liberal: no cap on these deductions

Regardless of your political alignment, it would be fair to say that Labor are proposing some fairly significant and radical changes to the superannuation and taxation system. They have indicated tax increases worth $30.6 billion over 4 years and $280 billion over 10 years. That has to come from somewhere!

Some of these proposals, especially those around franking credits and taxation of family trusts, have the potential to significantly diminish the net income of many taxpayers. The change to negative gearing rules is aimed at stimulating investment in new property, thereby super-charging the building industry, and easing the pressure on the price of existing housing, as investors would depart that market in droves.

Anything can happen of course, and we all know that what a political party promises, versus what they actually deliver once in power, can be very different. Some believe that an incoming Labor government would struggle to legislate many of these changes, with many members of the Senate cross-bench opposing many of their changes.