With an election announcement likely to be just around the corner, there were always going to be a couple of key things to note from this budget:

1. It was sure to be packed with announcements designed to attract votes (i.e. an election year budget).

2. The likelihood of any of the announcements coming to fruition will remain up in the air until an election is held.

As expected, the Treasurer painted a very rosy picture of the Australian economy, and on the outlook into the future. Mr Frydenberg predicted a budget surplus of $7.1 billion for the next financial year, higher than predicted, with that figure set to grow over coming years.

No doubt of most appeal to voters, included in the budget was a massive tax-cut sweetener, with cuts of $158 billion over 10 years being part of the package. These cuts surpassed the tax relief that has been promised by Labor – of course!

Here’s a summary of what we believe to be the key announcements that will impact on individuals, small business owners, investors and retirees:

– Personal income tax rates will be reduced from 2024-25, with the Government replacing the 32.5% and 37% thresholds with a single 30% threshold

– Tax relief for low-and middle-income earners of up to $1,080 for singles or up to $2,160 for dual-income families. The offset will be available for the current tax year and up until 2022

– A one-off payment to assist low income earners with energy bill payments, to be made in June 2019

Of most interest is probably the proposed income tax thresholds and rates that were announced. The Government proposes a ‘flatter’ income tax structure, rolled out gradually over the next 4 years. From 1 July 2024, it is proposed that taxpayers earning between $45,000 and $200,000 will all be on the same tax rate of 30%.

– Increasing the instant asset write-off threshold to $30,000 and expanding access to businesses with an annual turnover of up to $50 million

The instant asset write-off is likely to be the most appealing aspect to small business owners in the short-term. Currently at a limit of $25,000, this has been increased to $30,000, meaning businesses can invest in vehicles, plant & equipment, and claim a write-off (tax deduction) of the full amount in the year the asset is purchased, rather than depreciating the asset over several years. 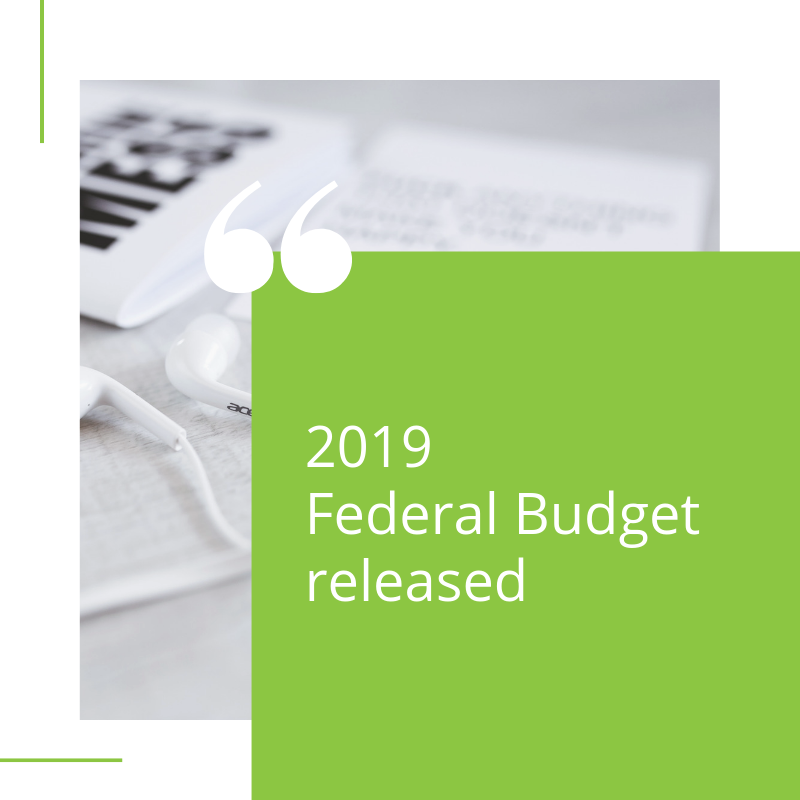 – Those up to and including age 74 will be able to receive spouse contributions, with those 65 and 66 no longer needing to meet a work test.

As usual there were a host of infrastructure projects announced, with a key focus on road and rail, particularly in key marginal seats of course. There was also significant funding allocated for mental health services, aged care, and enforcement of tax compliance.

It’s somewhat difficult to get too caught up in these budget announcements just yet, with an election just around the corner. Should the Coalition government be voted out, these budget announcements won’t be worth the paper they’re written on, and we can expect to see a vastly different approach from a Labor government, with proposed changes to franking credits, negative gearing and taxation of trusts among the changes that might have significant impact to taxpayers.

Should Labor win the election, there’s a view that a new Federal budget will be delivered by the incoming Government in September.

So, it’s really wait and see from here, but the consensus in today’s media is that the Government have had a decent crack at wooing voters, with a significant package of tax cuts, and generous infrastructure promises in marginal seats.

An interesting – albeit unsettled and uncertain – year ahead on the economic front.